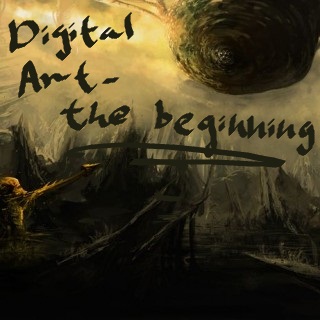 Before we can learn about the begging of digital painting, we first need to know some about digital art in general.

The beginning of digital art

The concept of digital art developed in the second of the 20th century, with the development of home computers.

The pioneers are a number of creators which was engaged with other fields such as design, math, technology and science. The British artist Harold Cohen (1928 – 1987) was a math teacher who lived in the United States and his work was to design and build furniture. Cohen dealt with scientific issues and their implications on art. Cohen was the first
to create computer generated art or simply – digital art. Cohen started to develop computer programs that could create this kind of art. His brother Bernard was a leader of a stream Pop Art in the UK.

Paul Brown was also enagaged with art based on science and technology. In 1984 he became the founder of the National Center for Computer Art and Design in England. Later in 1994 he was appointed to the professor of Art and Technology at the University of Mississippi.

David Em (1952) was born in Los Angeles and raised in South America. During the 70’s he studied painting and art in the Pennsylvania Academy in Philadelphia and also studied theater in the Goddard College in Vermont. His first digital work was created in 1975, and between the years 1977 to 1989 he was NASA’s chief artist, his work was to build virtual worlds.
David’s works is variety of outstanding computer simulations for different purposes.

For the digital artist, the computer and the digital camera are the drawing tools of his artwork.
The use of mechanical device between the artist and his creation placed obstacles in creating the digital art, a legitimate art, just as mediums such as photography and cinema that had to fight their way to be called – art.

Digital art contains a few categories of art in it, including digital painting, which is the art I am working on mostly.
In the next articles I’ll give a brief about the begging of the digital painting art.