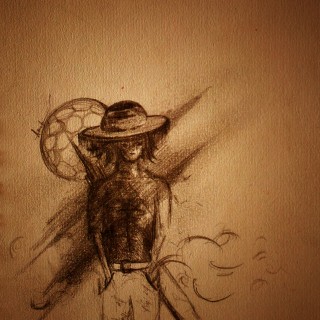 Such beauty reflects through the rising sun, the way it banishes darkness from the land. Day’s most colorful hues emerge from the center of that darkness, transforming the land into a landscape of unimaginable bliss in the process. The heavy breeze from the night before carried over into the effulgent daytime, sweeping the leaves two and fro atop branches that stretched towards the sun. Jeremiah could imagine no better state during which to cast his small, wooden boat into the lake near his forest home. Nature gave him everything he needed to understand the world and all the beauty within it; time gave him the patience necessary to absorb it all without distraction.

Pushing his small boat from the steps of his house to the edge of the river, a single dove flew overhead. It’s pure white feathers fluttered with unbound magnificence as the creature made its way higher and higher until it disappeared behind the warm clouds. Jeremiah watched the dove with an excess of admiration, wondering to himself what it was that drew the bird towards the sky. Then, he turned the thought away. His answer was clear as day: the bird sought to experience beauty, the very same that Jeremiah couldn’t help but to revere with each passing moment.

To the end of achieving a sort of eternal admiration towards the beauty of nature, Jeremiah dedicated himself to capturing every such moment, immortalizing it on a permanent fixture. That being the case, he always brought with him on his travels several important items: firstly, a sheet of paper; secondly, a sturdy pencil; and thirdly, a number of coloring utensils. During his long journeys on the river, the man would sketch endlessly – tirelessly – piece after piece of the beautiful world around him. Being self-contained, flowing back into itself, the river allowed the artist to make several trips around to capture the subtle changes in color and mood over time. It wasn’t strange for him to stay on that boat, traveling circles around the same structures, all day long. Or at least until it became so dark out that he couldn’t see either his environment or the canvas or both.

Once night descended once more, Jeremiah docked at his home, dragged the wet boat across the grass, threw the tarp over it, and headed inside to give concluding touches to his work. Not a single day passed that Jeremiah didn’t take advantage of the world around him. Not one moment passed that he didn’t dream of one day painting the perfect picture. To convey emotions within the beauty of trees, lakes, grass, rabbits and the like was a gift, as he understood it, that not many possessed. Thus, it held that those who could make use of their unique talents should do everything in their power to capture to subtle notions of the Earth that others couldn’t.

Creating art day in and day out, Jeremiah’s home quickly became overrun with paintings. When they became claustrophobic, he made a much different journey along the river. Some small way down his usual path was a branch in the flow of water. Turning left would return him to the infinite loop and turning left would take him into town. Every so often, he’d go there with his boat filled with watercolor paintings, and minimalist sketches. He was to the adults what the ice cream man was to children. They clamored and gathered about the town square when news of his coming reached their homes. By the time he was settled and out of the boat, the first customers were already lining up, looking through his paintings for set pieces for their shops or general decorations for their homes. They’d put them anywhere really, without exception.

There’d never been a visit where Jeremiah failed to sell his entire stock. Whereas it usually becomes more difficult to sell products the less variety there is, the townspeople saw the final painting as something fated for something greater than the rest. He couldn’t understand why they’d view it in such a way, but so long as he could put smiles on their faces, he didn’t care what they did with the paintings or what the paintings meant to them. Seeing so many people overjoyed at his arrival and many more perplexed that he could make such unique artwork without exploring terrains vaster than those he lived in, Jeremiah needed little in way of understanding.

The only truth, he believed, was the truth of beauty. The truth of nature. So long as he could capture the world around him and share that beauty with others, nothing else mattered, and nothing else ever would.

With his stock completely sold and money in his pocket, Jeremiah would buy non-perishable foods from the local markets before retreating to his home. Everyone always wore the most melancholy expressions as they watched him depart in his boat. He simply sat there, rowing steadily and barely moving, but there was a passion in his every movement that spoke volumes of his character. The people knew without a doubt that the artist and his portrayal of the natural world was one of the few things in the world that could give them true bliss. And with that, they waited anxiously for Jeremiah’s return.